Ciao, amici! Welcome to the third day of Story Empire’s Something Wicked Tour. Today, I am delighted to welcome C.S. Boyack, who is going to talk about Viral Blues, his first foray into a team-up story. Take it away, Craig!

Thanks for having me over, Staci. This is my daily stop on the Story Empire Something Wicked tour. Staci is over at my place today, so make sure to check out her post, too.

Our goal is a bit of mutual promotion this week, and there is a lot of good fiction being presented. We hope you’ll check all of it out.

My story is called Viral Blues. It’s a paranormal team-up adventure. It was always intended to be a sequel for The Hat, and it is, but it became much more than that. It dawned on me that many of my characters could occupy the same world, then it all came together that way.

I’m a big believer in living documents and keep many in the cloud. One of those is a list of topics for a blog tour, and I realized I didn’t have one for meeting the main character—until now. This poses a problem because this is a team story. In my mind, Lizzie St. Laurent is the main character, and even that poses a problem, as you’re about to see.

Lizzie is a hard working twenty-one year old. She worked two jobs to keep her apartment after life dealt her some hard blows. She wound up in possession of her grandfather’s old hat and discovered a long family secret.

The hat is actually a creature from another dimension and has been in her family for over two-thousand years. He forms a symbiotic relationship with Lizzie, and this allows them to fight against those things that go bump in the night—or eat you, they aren’t particular. The hat is capable of shape-shifting but is restricted to always being some kind of headwear. This is why he is no longer a Greek helmet. Lizzie even forces him to become scrunchies or headphones as the mood appeals to her.

So, in a way, my main character is actually two characters. Part of the fun is the hat has been in a box for twenty years. He missed the technological revolution and is kind of lost. Lizzie is also the first female he’s ever taken up with, so he has a bit of a learning curve.

They both have a certain snarkiness about them, and it boils over at times. It was kind of fun to add them to a team and aim that attitude at others.

Fighting against evil takes a toll on even the best heroes. Generations ago, the hat took up a musical instrument to unwind. He owns an upright bass and is a wonderful performer. He can only play it when synchronized with his partner, so he manipulates Lizzie’s fingers to play.

They front a cover band called Lizzie and the Pythons. If a song has a decent beat or a fun bass-line, it’s likely in their repertoire.

As an author, the band provides a pretty good way to get them out at night when monsters are likely to be about. It also allows them to travel, so Lizzie and the hat can get around without a lot of explanation why.

In Viral Blues, they are invited to a cryptic meeting where they meet their team for the first time. It seems the nation’s vaccine supply has been tampered with, and there are paranormal signs in abundance. These special people may be the only ones who can sort it all out, but it won’t be easy. The CDC, FBI, and others are also on the case and aren’t going to be too happy with civilian tampering.

To make matters worse, some of our heroes have a criminal record or have committed crimes they don’t want discovered. This includes Lizzie, so avoiding the authorities is paramount.

I intend to write more stories for Lizzie and the hat. This may be the only team-up in their series, but I’m also not closing that door. I have at least three more stories outlined right now, so it’s a great time to jump onboard. This series is designed so you can pick up any one of them and read it without feeling lost. There is no overarching plot to confuse you, no matter where you come in.

In my mind, it all boils down to this: How do you like your Halloween reading? If you’re looking for a slasher that is going to cost you a lot of sleep, this isn’t your story. If you prefer dark humor, a few tense moments, and a great paranormal adventure, Viral Blues might be just what you’re looking for. 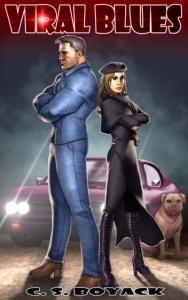 Someone knows about the hat. The creature from another dimension that helps Lizzie fight against the creatures of darkness.

They are summoned to a cryptic meeting with a secret society, where they meet other people with enhanced skills. It turns out someone, or something, has been tampering with the world’s vaccine supply. The goal doesn’t appear to be political or financial, but biblical pestilence.

Can this group of loners come together in time to make a difference when even the proper authorities are obstacles?

Check out Viral Blues, for your dose of paranormal adventure, with a strong sample of dark humor. And in recent superhero style, don’t miss the secret last chapter after the back material.

Today was special because Craig and I hosted each other. It’s even more special for me because I got to host one of the most creative people I’ve ever met, and one of the most generous. I really love that Craig is taking his craft to the next level, trying new things and greatly succeeding in his endeavors. If you haven’t read this character mashup story, you really need to. It’s a wonderful blend of mystery, action, and humor with a fabulous cast of former favorites.

Please use those sharing buttons, and leave a comment to show Craig some love. And when you’re done, I hope you’ll join me at his site, where I’m talking about alien technology in fiction. Arrivederci!