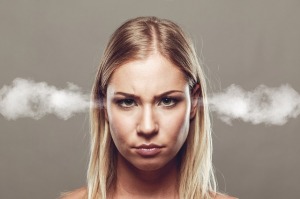 His voice startled her. She jumped and looked up from her computer. “How’d you get in here?”

“You probably forgot to lock it.”

No kidding. “You think?”

“What else could it be?”

She closed her eyes, took a deep breath, let it out slowly. Then she tried to type the next sentence and failed. Miserably. Train of thought was way down the track and around the bend.  “What do you want?”

“We’re supposed to go out.”

“That was two days ago. You said we’d go out today.”

Two days ago? Where the heck had the time gone? She still had at least ten chapters to write, and the draft was due Monday. And she needed time for rereading, revising, editing…

“I thought you spent weeks on the outline. Shouldn’t you just be able to follow it and write—well, whatever it is you have to write?”

Was that steam coming out of her ears? Felt like it. She could really use a pressure valve at the moment. “Writing a novel’s a little more complicated than just ‘writing whatever it is’.”

She glared at him, then she went back to typing. Wasn’t even going to dignify that with a response.

10 thoughts on “Short Fiction: Go Away”