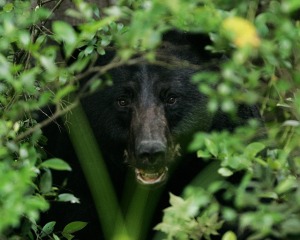 “What do you mean, you locked the door?” John dropped the cooler on the weathered planks of the porch.

Carrie rubbed her hands together and blew on them. “That’s what normal people do when they leave a house.”

“Because I don’t lock the door while I’m here!”

“We’re all alone out here, Carrie. There’s no reason to lock ourselves out.”

“Well, I guess the point is moot now. Break the door down or something.”

“I can’t break down that door. It’s too thick.”

“Well, do something. I’m freezing. I want to go inside.”

“We’d already be inside if you hadn’t locked the door.” He jiggled the door handle.

“So we’re stuck out here with violent cougars who are going to stalk and kill us?”

“No, we’re stuck out here in the cold with each other. Period. The only things in these woods that can hurt us are black bears, and they’re hibernating now. If we’re still out here at night, maybe a rabid bat.”

Carrie peered into the dense copse of trees in front of the cabin.

“There are no bats out there right now, Carrie. They’re nocturnal.”

“Why? You plan on buying our way inside?” She reached into her pocket and took out her iPhone. “Maybe an Amazon drone can deliver a lock-pick set.”

“You think you’re funny, but you’re not.” He rubbed his hands together. “I’m going to use it to open the door.”

She put her phone away. “Use your own.”

“I didn’t carry my wallet to the lake. I was fishing, not shopping.”

“Well, I left my purse inside. All I’ve got is my phone.”

“No cell reception out here. Need a satellite phone to call out.”

“Inside.” He sighed. “I’ll try the windows, see if maybe one of them is unlocked.”

“Why not just break the glass?”

“Why would I break the glass if the window is unlocked?”

“I’m freezing. Just get us inside.”

John started walking around the cabin, testing all the windows he could reach.

Carrie stared into the woods. Something was out there. Maybe not bats in the middle of the afternoon, but the leaves were moving. Not blowing in the brisk winter wind, but rather rustling in sections, like something was making its way toward the cabin. Stealthily.

She shook off the fear that skittered up her spine. Maybe it was just a friendly, neighborly hunter. A guy with a sat phone who could call for help. Or just let her sit in his warm vehicle, which she prayed was close by. “Hello? Hello… who’s there?”

John rounded the corner of the cabin. “They’re all locked. Why are you yelling?”

“I thought I saw someone. Maybe they could help.”

“No one’s out here. There are no cabins for miles in any direction.”

“Why would you get such an isolated place?”

She flung her arms out and spun around. “Relaxing? This is the most stressful thing I’ve ever done!”

“This is hardly a crisis. We’ll be inside in a minute.”

“We’re going to freeze to death!”

“Stop being so dramatic. I’ll break the window.”

“Great. So we’ll have arctic air blowing on us all night. That’s not much better than just sleeping out here.”

“You want to sleep out here? Be my guest.” He stepped off the porch and strode over to the largest window. “I’m going in.”

John picked up a rock, ready to strike the glass. He paused with his arm in the air and turned to her. “Scared? Scared of what? We’re all alone out here.”

He sighed. “Carrie, you’re safe from bats and everything else. Rabid or otherwise. We’ll be inside in a minute, and we can snuggle by the fire. It’ll be romantic.”

“I don’t know how romantic it’ll be with bats trying to get in all night.”

“You’re insane.” He raised his arm again and struck the window with the rock. Glass shattered into sharp fragments. Tinkling shards hit the floor inside, creating a soft and welcome melody in the otherwise still afternoon.

John boosted himself up on the window sill. He somehow managed to reach up to the latch while supporting his weight on one hand. After he flipped the lock, he tried muscling the window open. “It’s stuck.”

“Then crawl inside.” She shifted her weight and rubbed her arms. Wisps of breath evaporated into the air over her head.

He hopped back down. “Give me your scarf.”

“I need to knock all this glass away so I don’t slice open an artery climbing through the window.”

She took off the scarf and handed it to him. “I love how you’re not prepared for anything. No key. No credit card. No scarf. What would you do if I wasn’t here?”

“I’d walk inside because the door wouldn’t have been locked to begin with.” John hoisted himself back up, shimmied through the window, and climbed into the cabin.

Carrie heard a thud and a soft, “Ooof.” Then some colorful language. She shook her head. “You okay?”

“Well, I’m not staying out here all night.”

“Just give me a minute!”

Carrie walked over to the window and stood on her toes to peer inside. John was sprawled under the window, his face a contorted mask of agony. He needed her help, and she desperately wanted to get inside and warm up, but he was right. She’d only hurt both of them if she climbed in.

More to the point, she didn’t think she could pull herself up to the opening, anyway.

Rustling leaves behind her pulled her attention away from the window. Something dark lurked in the shadows. “Hello?”

“I said give me a minute,” John yelled.

“Who are you talking to?”

“Something big is out there. I can see a shape in the shadows of the trees.”

“The only thing big enough to make a shadow is a bear, and they’re all hibernating for the winter. It’s your overactive imagination.”

A branch snapped, and a dark shape emerged from the copse of trees.

Carrie’s body quaked, but her feet rooted where she stood. Chills rushed through her system, tiny ripples causing massive tremors from head to toe.

“Carrie? I can hardly hear you.”

A sinister snarl morphed into a monstrous growl. The bear charged, its giant paws devouring the space between it and Carrie. The ground quaked with each stride it took until Carrie was knocked off her feet—

Right under the beast’s open jaws.

This post inspired by the WordPress daily prompt: Dormant.

26 thoughts on “Short Story: Winter in the Weald”