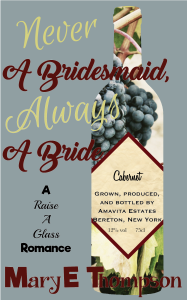 I’m so happy to introduce Mary E. Thompson to my site for the first time today. She’s here to talk about her novel, Never A Bridesmaid, Always A Bride. Let’s give her a warm welcome!

Thanks so much, Staci, for hosting me today! I can’t wait to share a little about Never A Bridesmaid, Always A Bride with everyone!

Never A Bridesmaid, Always A Bride is really special to me. I had the idea for a series about a group of cousins who inherit a vineyard years ago, but it had to wait until I had space in my schedule. Last summer, my husband and I visited the Finger Lakes area of central New York to get a feel for the towns, the vineyards, and the area as a whole before I started writing.

I fell in love with it!

To me, the Finger Lakes is quintessential small town. There are tiny little towns dotted up and down each of the lakes and in between, each with cute little shops and adorable homes and people so kind you want to move in. Seriously, we were tempted to move!

The vineyards we visited and the people we met inspired so much of my Raise A Glass series. One vineyard we went to, Toro Run Winery, had a beautiful view of Cayuga Lake, best view on the lake! I decided to set my winery in the same area once we saw how gorgeous it was there. The water stretched out below the vines at the widest and deepest part of the lake, the breeze sweeping up off the water. It sucked us in.

If you ever have a chance to visit the Finger Lakes, go! It’s beautiful and charming and so perfect. The weather isn’t nearly as hot as Never A Bridesmaid, Always A Bride, but you won’t regret a visit!

Alyssa Morgan thought she’d never set foot on her family’s vineyard again. Fifteen years was a long time to be away, but not nearly long enough when she has nothing to show for her time. Unless you’d count three failed marriages, two parents she barely spoke to, one disastrous attempt at a college degree, and zero friends to count on.

Jake Monroe thought about leaving Amavita Estates many times after Alyssa left him. Over the years, her family became his family. They accepted him. Loved him. Healed him. Her family was the family he never had, and without her around to remind him otherwise, he could pretend he was one of them.

Until she walked back into his world looking nothing like the girl he used to know.

Alyssa knows she needs to stay away from Jake. Jake wants nothing to do with her. But the chemistry that drew them together fifteen years ago is stronger than they are.

Especially when Jake glimpses the vulnerability she’s trying to hide. His old protective instincts kick in. He wants to soothe her old hurts, and maybe her new ones, too. But Jake doesn’t know if he can move beyond their past to be friends, let alone what he thought they would become. And Alyssa doesn’t know if she can lean on him again when there’s still another woman in his life.

Excerpt from Never A Bridesmaid, Always A Bride

“I wasn’t trying to pry into your personal life,” Alyssa lied.

Jake smiled at her, one side of his mouth kicking up. “Yeah, you were. You just don’t want me to know it.” He sipped his wine and focused on her again. “You can ask me anything, Alyssa. I won’t lie to you.”

She shook her head. “I don’t have the right to ask you anything. I shouldn’t even be here right now. You told me to stay away from you.”

She set her wine down and moved toward the door. Jake was faster and blocked her exit. Reluctantly, Alyssa looked up at him.

“I’m starting to think that was a stupid request. I don’t want you to stay away from me.”

Alyssa’s breath hitched. “What are you saying Jake?”

He stepped closer and tucked a short strand of hair behind her ear. She knew it wouldn’t stay put long, but the gesture was something that made her want to lean into him and stay there forever.

It was Jake. Her Jake. The man she’d compared every other man to, and always found them wanting. He was the love of her life, she knew that with certainty. But she’d blown her chance with him.Right?

“I’m saying I’ll never be able to stay away from you for a full year, Alyssa. And I don’t want to.”

Before she could say anything else, his lips met hers. It was soft and gentle, so much like their first kiss that she wanted to cry. Jake was a man who would cherish her. Take care of her. Do anything for her.

And she’d tossed what they had away.

She couldn’t think about that. She didn’t want to relive her regrets. She just wanted to enjoy the feel of Jake kissing her. Of him not pulling away like the last time. Of him wrapping his arms around her waist and tugging her closer. Close enough that she could feel every plane of his hard body against hers.

He pulled back just enough to look in her eyes. He grinned and jumped right back in to kissing her. She slid her hands up his chest and around his neck, toying with the hair on the nape of his neck. His hands wrapped tightly around her, as though he was afraid she was going to run away.

Mary E. Thompson grew up loving to read, like a good little girl. Many nights she would fall asleep with the flashlight still turned on as she hid under the covers trying to finish the last few pages of a book. As an adult, the light from her e-reader means she doesn’t need a flashlight, but she still stays up way too late to finish a book.

When Mary’s not reading, she’s playing with her two kids or living out her own real life romance novel with her hubby. She has a weakness for chocolate, especially when it’s paired with peanut butter, and has been known to have a bad day just because there’s no chocolate in the house. Unless there’s wine. Then everything is okay.

Mary grew up in Buffalo, New York and swears she’s the only local to never ski or snowboard. Soccer was always her sport, with a couple adventures white water rafting and skydiving to keep things interesting. Mary moved to South Carolina for college but missed Buffalo every day. Yeah, she thinks she’s crazy, too. She somehow convinced her South Carolina born and bred hubby to return to Buffalo to raise their kids and live out their lives. He’s still not sure what he was thinking.

I’m so glad you visited today, Mary. Best wishes with your release.

Friends, not only is this Mary’s first time here, it’s her release day! Let’s give her and her novel some blog-post-love and leave her a comment below.