I’m busy working on Medici Protectorate book three, Body Armor. This story follows Nico and Donni, and they’re in for a bumpy ride.

To get readers out of the Cathedral Lake mindset and into the Medici Protectorate mood, I’m going to post not one, not two, but three tidbits today. That’s right; three! One from each novel.

Book One, Bleeding Heart
This excerpt shows Gianni watching Franki at the museum, where she is in the Hall of Architecture sketching one of her favorite pieces. It’s a plaster cast of four maidens who basically serve as support columns for a roof. He learns a lot about her by watching her work and by studying the art she creates. These drawings are important to the development of her character and their relationship.

Sable curls curtained her face, shadowing her concentration from his view, yet it remained palpable. He felt the energy emanating from her, transferred to the page. “You do nice work.”

“It’s just a sketch to warm me up. I always start out like this.”

She looked up and frowned a bit. Shrugging, she said, “I guess because the ladies remind me of me and my sisters.”

She batted him on the arm. “A lady doesn’t discuss such matters. And no, not that part. They are power. And strength. They always remind me of us.”

Book Two, Mind Control
This excerpt takes place outside the police station. The Brotherhood needs information they’ll only get because of Jo’s relationship with Officer McGuire (or rather, his infatuation with her). Vinnie makes use of the feminine wiles Jo doesn’t even know she has, and after he’s helped her get ready, he’s surprised to find he’s not crazy about the idea. It’s the beginning of his awareness of his feelings for her. 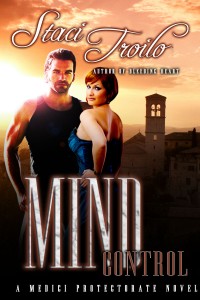 “That’s the problem,” he said through clenched teeth.

“Are you sure this is the way to do it?” She looked down, and her cheeks flushed.

“Positive. Vinnie’s the strategist. He never leads us down the wrong path. This will work. McGuire won’t be able to take his eyes off you.”

Vinnie struggled not to punch his brother in the face. It was bad enough thinking about McGuire ogling her. He didn’t need G doing it, too.

Book Three, Body Armor (Not yet released… That’s right, folks. You’re seeing it here first!)
This excerpt takes place at a strategy meeting. Nico, unbeknownst to most of the group, has been burning the candle at both ends working on a side project. He’s exhausted, injured, and irritable. This snippet helps reveal his relationship with all his brothers, but mostly with Coz (his best friend), as well as the burgeoning feelings for him that Donni is starting to recognize and process.

“As I was saying, I got an email from Mike.”

“Can’t you sit up and address us properly?” Gianni asked.

“What are you, my mother?” Nico and Gianni glared at each other.

Nico stood up and walked into the house, a slight limp visible in his gait.

“Well, that was a productive meeting,” Vinnie said.

Gianni sat back again. “Not like you to volunteer for heartfelt discussions.”

“Who said we’re going to talk? Seems to me he needs a swift kick in the ass. And seeing as how he’s still limping, it won’t take much out of me.”

Donni bit her lip when Coz walked inside. She hoped he was joking. Given the state Nico was in last night, he’d already been through enough.

Then again, maybe he needed the crap kicked out of him.

As you may have guessed, this series is about strong, passionate women and powerful, stalwart alpha males. The family bonds are tight, the relationships fierce. And the love and desire the couples experience are equaled only by the intensity of the danger they all face and the battles to keep everyone safe.

This series offers something for everyone—romance, intrigue, suspense, action, magic. I hope you see something that appeals to you and decide to read a sample chapter or more. (The beginning of each published novel can be found on those books’ respective pages, the links for which are in the titles above.)

Please let me know what you think of these excerpts, or if you’ve read the series so far, what you’re hoping to see in book three. I’d love to hear your thoughts.